Home SDM-WindPoS in a nutshell 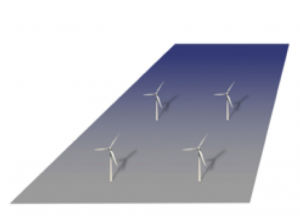 The computation of the wind at small scale and the estimation of its uncertainties is of particular importance for applications such as wind energy resource estimation. To this aim, we develop a new numerical method based on the combination of an existing Numerical Weather Prediction model providing a coarse prediction, and a Lagrangian Stochastic Model adapted from a pdf method introduced by S.B. Pope for turbulent flows.

WindPoS is currently made of three blocks:

Summary of past activities

The WindPoS project has been supported since 2005 by the french agency for environment (ADEME) in three main stages:

2005 – 2007: Inria (Moise and Tosca teams) and LMD (Laboratoire de Météorologie Dynamique) released the first version of SDM, which was meant to be compared with MM5.

2008 – 2010: The consortium implemented an atmospheric boundary layer model. The partners were the same Inria teams, LMD and the CETE (Department from the Minister of Ecology and Transport, now called CEREMA)